This page explains why Glyn Marston is still regarded as Walsall's running Ambassador, many years after he retired from ultra long distance running

To run across the Grand Canyon, break world records on treadmills, run in races of upto 150 miles non stop, represent your country in one of the most gruelling foot races on earth and raise thousands of pounds for charity- makes you an Ambasssador for your sport and for your region.

Glyn Marston is the only runner from Walsall to have achieved all this and more.

Every race he did, every gruelling step of each event was done with his 'SNEYD STRIDERS RRC' club vest that had the words 'SNEYD STRIDERS, WALSALL' , Glyn was always promoting his club and his region- everywhere he ran.

"Glyn marston- a most suitable Ambassador to the borough (of Walsall)"

From the desire to quit smoking came a complete life changing decision for Glyn Marston- 1993 was the year that British runner Eamon Martin won the London marathon and a hint of inspiration hit Glyn that year.

By coincidence a bet made to Glyn that he couldn't run a marathon was made and the gauntlet was laid down- the challenge was made... and Glyn went into training.

In the early 1990's local media was full of this local runner who was not just taking on marathons but running far beyond the 26.2 mile marathon distance and a great reputation was made for Glyn.

Local council were using him as an example for why folk should lead an healthier lifestyle, and with Walsall having a reputation for being the obesity capitol of the nation, Glyn set out on a one man mission to correct this by inspiring folk to get fit.

It wasn't long before local council and media were refering to Glyn as WALSALL'S RUNNING AMBASSADOR.

Glyn Marston soon became sponsored by ASICS UK as his stories of breaking World records for running on treadmills, running in races of 150 miles non stop and marathons around the world became known nationally.

Celebrities were inviting him to join them on marathons and fundraising events, more so most of the cast of EMMERDALE, Chris Chittel (Eric Pollard) often writes to Glyn to ask how he is doing- and what he is doing at the moment.

In this photo, Glyn had just finished his RUN PARIS TO LONDON event (with the final part being on the actual London marathon the following day). the cast of Emmerdale and the TVTimes charity team were at the Asics stand to greet Glyn at the London marathon expo - and so were a huge crowd of admirers who gave Glyn a loud round of applause.

To have a celebrity like Nell McAndrew ask if you will pace her on her very first marathon (London 2004) is a sign that you are making a huge reputation for yourself in long distance running, and this is what happened to Glyn- both Nell McAndrew and her 'pacer' Glyn Marston crossed the finish line in 3 hours and 22 minutes.

Nell McAndrew researched Glyn Marston and was quoted for saying "Glyn Marston is the most famous non celebrity I have ever met, Glyn is a true inspiration and a real ambassador of long distance running".

Nell regularly wrote to Glyn and his son Liam.

A letter from Nell

How about that for a message that came out of the blue, Glyn treasures this photo and the friendship he formed with Nell McAndrew and other celebrities that he met through his running and charity fundraising.

While running on a treadmill in the shop window of LILYWHITES, PICCADDILLY, LONDON (breaking another 7 day world treadmill record), Dame Kelly holmes 'popped' in to wish Glyn good luck- she was amazed that not only was Glyn to be running over 400 miles in seven days but on the eigth day he will be running in the London marathon.

She gave Glyn some expert advice and a kiss on the cheek, in a TV interview that was being conducted in another part of Lilywhites- Dame Kelly Holmes announced her best wishes for Glyn Marston in his record attempt and charity fundraising event - prompting Sky news and local tv news to film Glyn and feature him on their programmes later that day.

As news broke (a few years later) about Glyn Marston's knee problem many of Glyn's friends wished him luck via local media.

The express and star newspaper were running stories of "CELEBRITIES CONTACT US WITH GET WELL WISHES FOR GLYN MARSTON....."

Ron Hill ( 1960's Commonwealth gold medal marathon runner), Vicki Michelle ( Actress), Nell McAndrew (model and tv personality) to name a few had sent their messages to the express and star with a request that they pass them onto Glyn.

Dame Kelly Holmes had actually sent her best wishes to the hospital where Glyn was having his surgery, a total surprise for Glyn and a gesture that cemented the fact that he was and still is- Walsall's running ambassador. 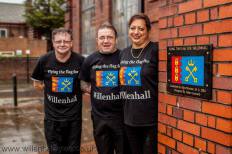 To be asked to launch your town's official flag is a real honour and the organisors of the Willenhall flag campaign approached Glyn and asked him to launch the flag and to be the official Ambassador to the action group (willenhallayewe.co.uk).

Glyn was to see his name set in stone outside Willenhall library where the flag now flies.

A great honour for Glyn Marston.

Glyn Marston is the only person in the world to have cycled from the 'leaning tower of Pisa" to the "Eiffel tower in Paris" to Blackpool tower in a challenge that he devised himself and titled "THE TRIPLE TOWER CHALLENGE".

So impressed with this feat of extreme athletism Coventry transport museum asked if they could display Glyn's bike, banner, cycle jersey and photographs for a few months, Glyn was totally surprised and really honoured to have his name on display at such a venue that attracts visitors from all over the world.

BBC DIY SOS Be sure to catch up on BBC DIY SOS from Thursday 9th June - Lucion lend a hand in Shropshire! 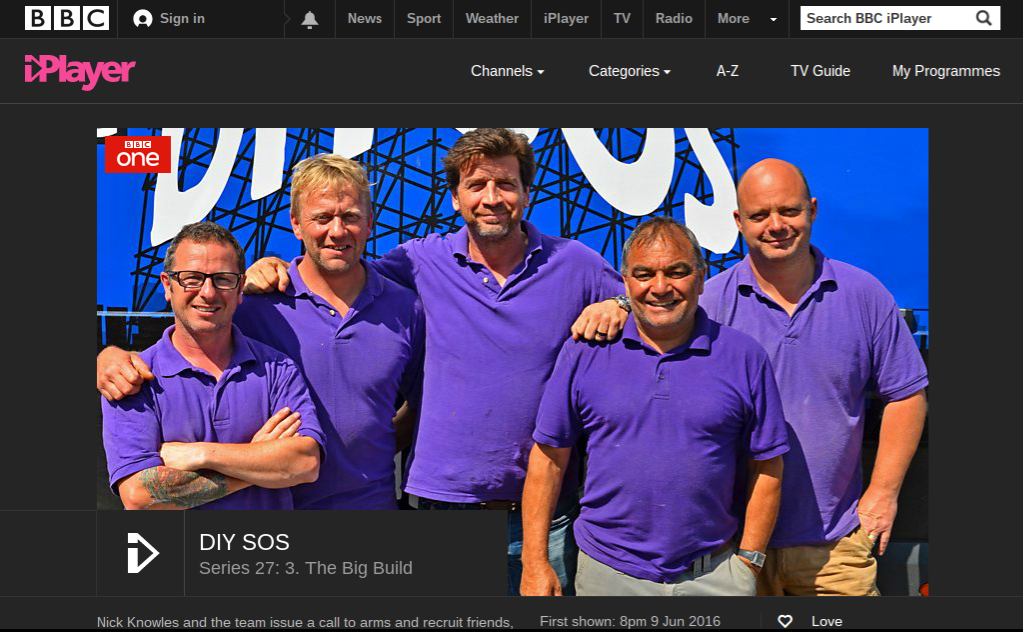 Asbestos surveyors Glyn Marston and Thomas Holl from Lucion's Wolverhampton office volunteered their time and expertise to lend their skills to a family in Shropshire who were in need of support.

Glyn and Thomas worked on set of the BBC’s long running TV programme DIY SOS: The Big Build. Alongside more than 100 tradesmen and contractors, they undertook a full asbestos pre-refurbishment survey of the property to ensure the safety of both the family and the volunteers before any works could be carried out. After only nine days of hard work from the local community, the family’s country cottage was completed and revealed on the 18th February. Well done to Glyn and Thomas for volunteering and representing the company. If you missed the show you can catch up on BBC iPlayer for 19 days.

To run the London marathon 10 years after being forced to retire with a replacement knee makes you even more of an Ambassador to Walsall and its boroughs. Look out for Glyn and the gorilla/cage costume.

When Glyn Marston was asked to be a guest of honour (as the local Ambassador) at a charity event that he is supporting he didn't figure on one thing- he would be cycling on his training static bike for most of the evening. Being the man he is Glyn simply jumped at the chance and used it as a training session for the gruelling challenges he has ahead of him.

This gesture boosted the fundraising and highlighted the good work being done by himself and the good folk of willenhallayewe.co.uk - Kalie Plant in particular. 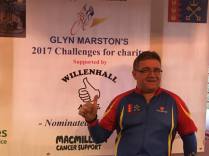 This is what it is all about- challenges for 2017 that will raise a lot of money for good causes. The charity banner is being autographed by celebrities and now a second one has been made because one banner may not be big enough to fit all the autographs on.