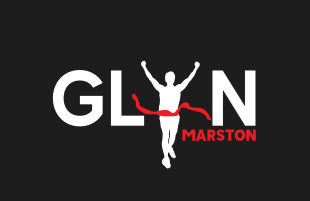 ..........With no previous ambitions to become an athlete, Glyn first took up running as a challenge to regain his fitness after giving up smoking. The intention, with the encouragement and small wager with a friend, was to complete the 1994 London Marathon and then retire gracefully. Training began in September 1993 and after only a few short weeks, Glyn had competed in a number of 6 and 10 mile races, his first full marathon coming just three months after taking up the sport. Needless to say, he completed the race running for a local charity, The Rainbow House Hospice now known as Acorns Hospice raising money for terminally ill children. As a result, Glyn was invited to attend The Children of Europe Awards in June 1994 at The Dorchester Hotel, London where fate took a hand and some words of encouragement from actress Vicki Michelle of Allo Allo fame inspired Glyn to such a degree that life was never to be the same again.

In the coming years, Glyn was to complete over 100 marathons worldwide including the New York, Rome and Dublin as well as 13 consecutive London Marathons. He competed in over 70 ultra distance races (beyond 26 miles) including the Honour of being one of only six runners from the UK to have ran the width of The Grand Canyon USA and regularly competing in the Grand Union Canal Race – 145 miles from Birmingham to London and is currently the only runner in the history of the event to complete the distance five years in succession. He also competed in the 106 mile run from Pudsey in Leeds to London for Children in Need and the London to Brighton Run. In 2003 Glyn completed one of his greatest achievements to date when he ran the Paris Marathon and on crossing the finish line, continued running to the start line of the London Marathon completing the challenge with the end of his second marathon in a week having run a total of 302 miles in all. Most of this was done in the name of charity. So far his efforts total in excess of £100,000 spread over such causes as Tommy’s Appeal, Muscular Dystrophy, St John's Ambulance, the National Autistic Society and various local charities which includes Walsall Hospice Appeal and fundraising for the Mayor of Walsall's charity appeal.

In the late summer of 2004, Glyn was honoured to represent his country running in the Greek Spartathlon, 153 miles non-stop from Athens to Sparta in searing heat. This event is one of the most gruelling events on record with competitors having to qualify by proving they are up to the challenge. It was John Foden, President of the Spartathlon Association who then approached Glyn with the invitation to run. The invitation was later extended to include the 2005 Spartathlon.

Immediately preceding the 2005 London Marathon, Glyn smashed the Guinness World Record for long distance running on a treadmill over seven days which he did once again to raise money for charity. He repeated the challenge in 2006.

Despite never asking for recognition for himself, inevitably success brought its own reward. He has run with well known celebrities such as Nell McAndrew and the cast of Emmerdale, was nominated for Midlander of the Year Award 2001/2002 and BBC West Midlands Unsung Sporting Hero Award 2003/2004. In 2004 Glyn was awarded the Mayor’s Civic Award and was also heralded as Walsall Sports Personality of the Year in 2001, 2003 and 2005 and Glyn was the first person to be named as Walsall's Running Ambassador by local media (though Glyn Marston was honoured by this accolade, he chose not to adopt any title but instead he let his running bring him respect in the region).Glyn marston had become known internationally as 'THE' British Roadrunner because of his feats of extreme athletism and displays of pure stamina and endurance.

It goes without saying he was greatly honoured to be invited to a Royal Garden Party in 2002 where he and his first wife Ann were granted an audience with The Queen. These are just some of the awards Glyn has received to date.

Until early 2006, Glyn ran and trained with Sneyd Striders Running Club based in Walsall and with whom he was proud to serve as one time Club Captain. Training required a great deal of sacrifice and commitment with normal training runs consisting of around 60 miles a week increasing to approximately 85 where a marathon was involved or 100 for an ultra distance race averaging 10-18 miles on a daily basis. In addition to all this, together with colleagues Kevin Postins and Steve Budjoso, Glyn co founded a new beginners club and of course, was delighted when his young son Liam took up the sport. Needless to say it was an extremely proud moment for Glyn when Liam completed his first 5km race inside 30 minutes.

Glyn's running achievements continued to escalate until May 2006 when disaster struck. A recurrent knee injury suddenly flared up during the 145 mile Grand Union Canal Race forcing Glyn to drop out. Devastatingly for him, later tests and surgery confirmed irreplaceable damage to the joint resulting in early and unexpected retirement from running. For Glyn it was a bitter pill to swallow and for a while it seemed to be the end of his competitive career. However, and with a little help from a few friends, Glyn's determination to conqueror a new sport was soon cultivated. Following enquiries to the British Wheelchair Racing Association, Glyn was accepted as a member and trained for his first half marathon race in September of 2007. Once again his future aim is to compete in the London Marathon but this time in a wheelchair. With Glyn's strength of character and dedication there is no doubt he would achieve his goal and had received messages of support from Dame Tanni Grey Thompson, Dr Ian Grey Thompson, Dame Kelly Holmes and of course, Vicki Michelle who supported him throughout his running career, in addition to numerous fans and admirers to which all of whom Glyn is extremely grateful. He continues to strive to help others by his tireless fundraising efforts particularly for the National Autistic Society now drawing his inspiration from his young son Liam who has autism. Glyn is also currently involved in a project with Walsall Council to improve sporting opportunities for young people with disabilities. It is hardly surprising that Glyn has just added to his tally of accolades by being named as an Express and Star Newspaper Local Hero Award winner. All of this is not bad for a man who was only going to run one London Marathon.