Stories of great and gruelling challenges.

Click on panel on the left to view Glyn's stories

When Glyn Marston announced to his family and friends in 1993 that he was going to train to run a marathon he was not taken seriously.

Little did they know- little did Glyn know that when he had taken his first steps as a runner that he would have the adventures that he went on to experience. 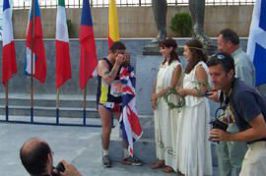 Finish line of the Spartathlon 2004

With the help of work mate 'JASON HAYES', Glyn was able to run a four mile route that was used by Jason's football team.

Jason was quick to notice that Glyn was running at a faster pace as the weeks went on, and so advised Glyn to join a running club- a local club by the name of Sneyd striders.

This decision was to change Glyn's life and turn him into the Ultra distance runner that he is known as today. 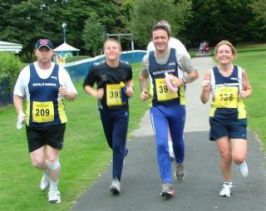 A few Sneyd striders members on a local race.

For a while Glyn became club Captain of Sneyd striders, he even designed the new kit that the club run in today.

Glyn Marston's success on the 145 mile Grand union canal race is a record to be proud of but that success would not have happened if not for the great support from Sneyd striders running club whom turned out in forced for the 5 years (that Glyn had completed the distance) in succession.

Please share in Glyn's pride as you read the stories of his extreme atheletism (links on the left of this page.