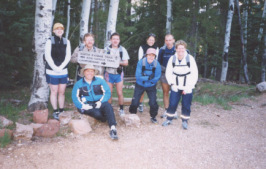 At North rim and the start of the challenge.

Being an avid reader of the Running Fitness Magazine, I was pleased to see a competition in one of the magazine’s issues "Run the race of a lifetime" the headline read, a once in a lifetime chance to run across the Grand Canyon, and race against a team of runners from America.

All you had to do was send in a CV of your running experiences, the magazine wanted three men and three women to take part. I sent in my entry form with the hope that I would get chosen to run, but with so many runners applying, my chances would be very slim.

Some months  passed and I had forgotten about the Rim to Rim run across the Grand Canyon, so I was very surprised to receive a phone call from a man named Paul Larkins (the Editor of Running Fitness Magazine), to inform me that I had been chosen to run. At first, I thought it was a wind-up, my brother knew that I had applied and perhaps he was setting me up, so I asked again, "who is this"?

"I'm Paul Larkins from running fitness, and I'm pleased to tell you that you are to run the Rim to Rim challenge-if you still want to”?

Of course I wanted to, I couldn’t believe it-an all expenses paid trip to Arizona, staying at Phoenix and visiting different places for photo shoots (for Timberland mountain wear. They paid for the holiday in return for the story to be featured in the magazine).

In the run up to the journey, we were taken to Loughborough University for a number of fitness tests, then we had a weekend in the Lake District for hill training and team building-this made the prospect of the Grand Canyon run even more exciting.

The time came to fly out to Phoenix. For me it was my first time to the USA- the change in climate was noticeable as soon as we landed, the heat and humidity was intense (thank goodness our hired cars had air conditioning),the first thing we did when we got our hotel was to jump in the pool.

Among the excitement was a little bad news. The Park Rangers had banned a "race through the Canyon" on safety reasons (understandable), so we had a choice, visit parts of Arizona for photos for the magazine-or run through the Grand Canyon but have no help. No assistance if things got bad-once we ran down to the floor of the Canyon, we would have to get ourselves back up to the other side on our own, no matter how tired or ill we may be feeling, and we would have to carry our own water and emergency supplies.

It was a huge choice to make, but myself and the other five runners were united in the fact that we had all trained hard for this, so we would go ahead and do it, even though we would not be racing against an American team-it would be just us six British runners.

We ran in pairs and took it in turns to set off at intervals so as not to give the impression that we were racing. As we set off from the north rim it was cold, very cold- but within 10 minutes, the climate got warmer, so it wasn’t very long before we were in t-shirts and shorts.

The scenery was breathtaking, plants the like of which I had never seen before and rock formations that made the whole challenge seem more like a sightseeing tour than a test of endurance. I spent too much time taking photo's (well I may never pass that way again).

The rest of the runners had their own ways of attacking the run. Some were in front in the hope of getting the challenge out of the way before it got too hot, and some who took their time to keep refreshed for as  long as possible. As for me, despite carrying my own emergency supplies (water etc) I was too busy snapping away with my camera.

It was amazing. The downhill run from the north rim was so easy, the views amazing. As were crossing the bridge at the Colorado river, but then the sting in the tail- the uphill climb to the south rim, by now the climate had got hotter and more humid, the steep climb up to the south rim was getting steeper by the mile, my legs were getting heavier and heavier and despite wearing sun block, I still got burnt. My face felt so sore, was I really doing this for enjoyment?

I kept running out of water, but thankfully there were drinking water points along the way (they seemed to pop up at the right moment ).

I reached the point of digging in and gritting my teeth, just get it over and done with-the sooner the better. After running for what seemed like eternity, I could see a group of people at the peak of the steep climb, it was the team from Running Fitness Magazine. This was the sign that the challenge was almost over and I found myself in a sprint to the top to the cheers of the rest of the team.

I will admit to being sick as soon as I stopped running-this was due to the heat and dehydration. As soon as I got adequate fluid back in my system, I felt great-so great in fact that I ran back into the canyon for a couple of miles to help out another runner who was struggling to finish.

The feat was featured in issues of Running Fitness Magazine, of which I take out and read from time to time (with pride),then there's my photo's to look at- this gives me the yearning to run it again sometime in the future- watch this space. 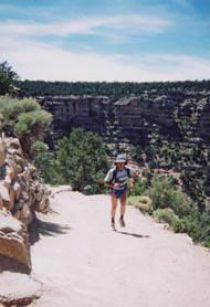 Running up the South rim and the finish of the gruelling challenge.