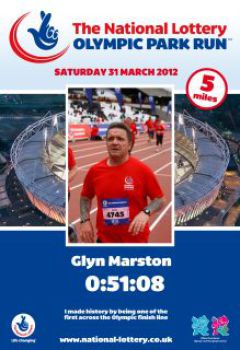 MAKING HISTORY BY BEING AMONG THE FIRST TO CROSS THE 'OFFICIAL' OLYMPIC FINISH LINE IN THE OLYMPIC STADIUM.

Glyn Marston was thrilled to learn that he had been nominated to be among the first of the athletes to run across the OLYMPIC STADIUM FINISH LINE, because of Glyn Marston's OUTSTANDING CONTRIBUTION to sport, charity fundraising and to his community it was obvious that he was the only person to represent Walsall in such a presitage event.

So yet again, Glyn was to be called upon to be Walsall's sporting Ambassador and promote his town.

For a man whom was ranked High in the British Ultra distance athletic scene and faced challenges of 150 miles or more, it was so strange to see an Athlete of Glyn's calibre having to train for a five mile race- but lets not forget that he has a titanium right knee.

The whole event was a day to remember as the runners took in the sights of the stadiums that will be staging the London 2012 Olympics, Glyn was in awe as he 'jogged' his way through the five mile route- protecting his right knee all the way.

And then came the moment of great pride.... the run around the track of the Olympic stadium and the sprint across the Official finish line.

'51 MINUTES AND EIGHT SECONDS' is not a fast time for a runner like Glyn Marston, but to get to the start line of this race is something many others have not had the joy of doing- let alone running across the Olympic finish line, WELL DONE GLYN. 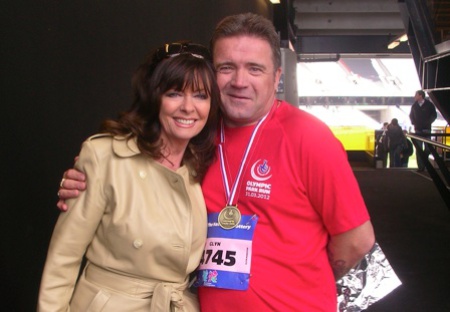 Vicki Michelle was waiting to give Glyn a 'well done' hug.