A few of Glyns friends in the world of charity fundraising

On tablet- click on picture tabs and scroll through gallery 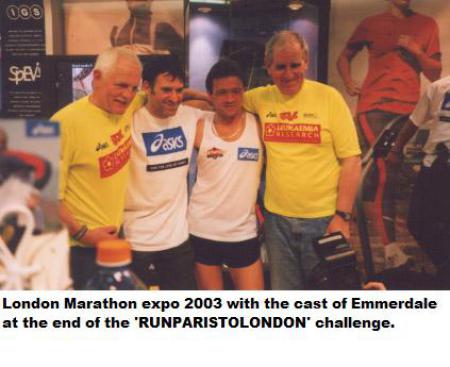 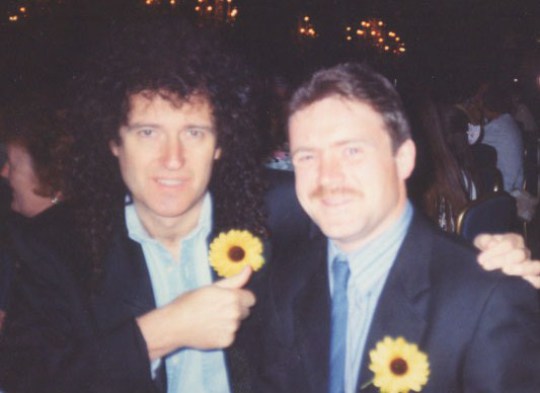 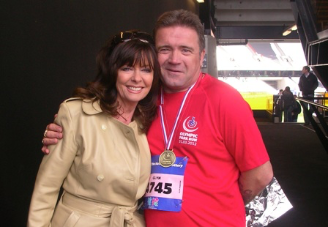 With Vicki Michelle at the Olympic park run.

Glyn first met Vicki Michelle in 1994 at a charity event.

But Vicki Michelle talked him into carrying on with his running and carry on raising funds for charity.

If Glyn had not have taken her advice, he wouldn't have achieved any of his great goals in endurance running. 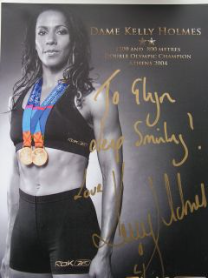 Kelly Holmes met Glyn when he was halfway through his '7 day treadmill world record attempt'.

Kelly was amazed at his feat of endurance and strength.

Dame Kelly sent Glyn a get well soon message when she heard of his knee operation- Glyn treasures that card. 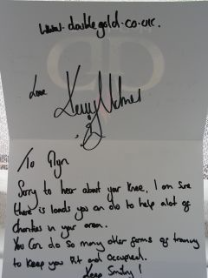 The message that was sent from Dame Kelly Holmes and a valuable keepsake for Glyn Marston.

Being awarded with a cheque at the HiQ local hero awards.

Sally Gunnell was in admiration at the story behind Glyn's nomination.

A few messages to Glyn did follow as she wished him luck in his upcoming charity challenges. 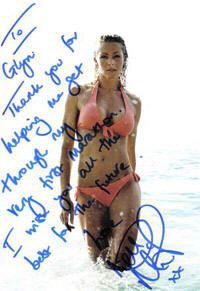 A message from Model and Tv personality NELL MCANDREW as she thanked Glyn for helping her through her first ever marathon (London 2004).

Glyn paced Nell to a finish time of 3 hours and 22 minutes... a time that she was over the moon with at the time. 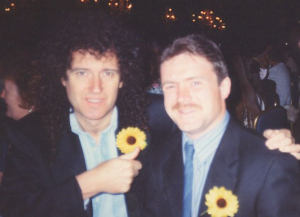 A proud moment in Glyn's life as he was to meet one of his heroes from his favourite band 'QUEEN' .

Anita Dobson took this photo ( using Glyn's camera) and Glyn had a picture he thought he would never have- a shot of him and Brian May. 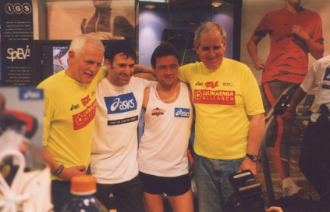 When celebrities request that you join them on marathons and other fundraising challenges, then you know that you have made a good name for yourself in running and charity fundraising.

This is what happened to Glyn Marston, infact and on the Blackpool marathon- one person asked Glyn if he was part of the production team of Emmerdale, Glyn replied no and asked why this person thought he was connected with the tv series, The person replied "You know the cast of Emmerdale so well and they know you so I assumed that because I have'nt seen you on the set of Emmerdale, you must be a cameraman or something".

A proud moment for Glyn on that day. 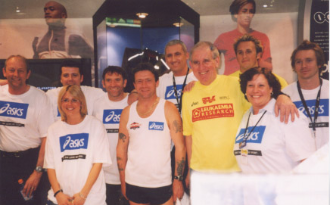 Some of the cast of Emmerdale and the team at ASICS UK all posed proudly for this photo with Glyn Marston as he had just ran all the way from Paris to get to the London marathon expo in London.

The final part of his challenge was to run the London marathon the next day- of which he did successfully.