Just a few photos from the event that turned Glyn Marston into an ultra distance runner. 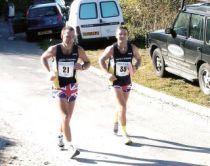 1998 was the year that Glyn Marston entered into the world of ultra distance running (beyond the 26.2 mile distances of any marathon.

The London to Brighton was a huge attraction to Glyn because of the sense of achievement that comes with such an event- and also the reputation it brings to any runner who is successful on the event.

This event was to see Glyn Marston make his first T.V. appearance as a runner- being featured on Central news, little did Glyn know at the time that this would be his first of many T.V. news and documentary programmes. 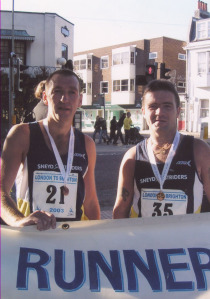 For some reason Glyn was greatly attracted to the London to Brighton, he had successfully completed the distance on more than five occassions and had helped to train fellow Sneyd striders runners to take on the event.

Colin Highfield (Pictured with glyn at the finish line), Lee Adshead and great friend Nigel Churchill- infact it was the year that Nigel had ran with Glyn that the organisers announced that they were to extend the finishing time by an extra hour because of the torrential rain that lashed at the runners from start to finish.

Glyn and Nigel crossed the finish line with hours to spare, both weary and windswept, tired and saturated with their medals around their necks and Nigel announcing never again!!