London olympics 2012 and Glyn Marston was among the few who were to be running around the olympic park with a lap around the official stadium and to run across the finish line of the olympic running track - a few weeks ahead of the Worlds olympic athletes would.

To sum up the event "MAKING HISTORY BY BEING AMONG THE FIRST TO CROSS THE OLYMPIC FINISH LINE". 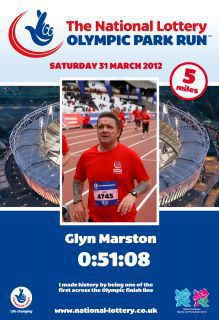 Making history by being among the first to run across the Olympic finish line. 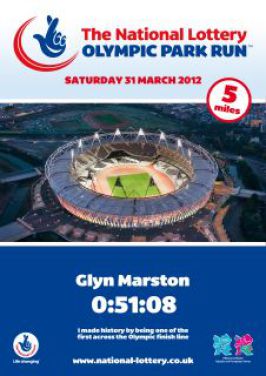 5 miles in 51 minutes is far from the fast times that Glyn used to run before he had his right knee completely replaced but to be honest- when you have the chance to experience an event like this, you take you time to soak up the atmosphere anyway. 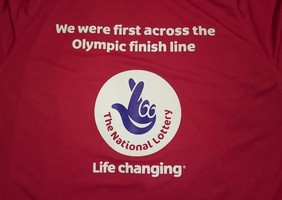 Official event T-shirt, (only a few have these)

How amazing that Glyn has only worn this t-shirt for the event, it is now proudly hanging up in his wardrobe as a great reminder of a truely amazing day- which was filmed by Central news whom had invited Glyn Marston to the event as one of their guests for recognition of his community and charity work.