Captained by Glyn Marston and joined by a young Liam Marston. 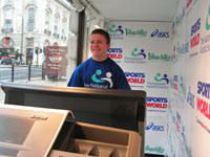 Liam on the treadmill, just days before his 15th birthday he was on his way to becoming a World record breaker.

The team 7 day world treadmill record was devised by his dad 'Glyn Marston' and held in the shop window of Lilywhites store in Piccadilly, London 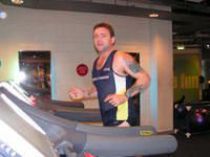 Glyn's son Liam has Autism and Glyn has supported the charity immensely through his running over the years. 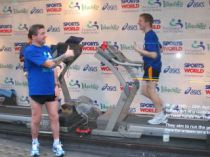 As Glyn stood outside the store and collected donations from passersby, Glyn proudly watched Liam running his stint on the treadmill. Liam was the star of the event and his ability to be a cute kid was a main attraction for the event. 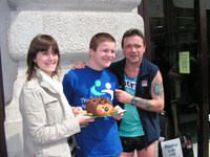 Wednesday the 19th of April - Liams 15th birthday... Halfway through the challenge and the birthday celebration began with a chocolate cake in the shape of a hedgehog with chocolate fingers as spines in his back. 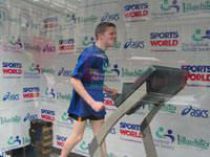 This may seem a page dedicated to Liam Marston on a treadmill but infact it is a testiment to how Glyn Marston has got a special needs kid to become a World record breaker and achieve the pride of raising funds for a worthwhile cause. 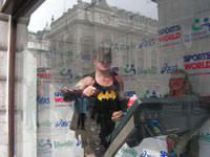 BATGIRL ? BATGIRL ON A TREADMILL ??

Glyn Marston's dedication to charity fundraising has no bounds and when he was asked by a fellow runner, a fellow fundraiser for the National Autisitic society to join him and another friend to be part of a super-hero group on the London marathon, Glyn accepted without hestiation.

"Sounds great to me" replied Glyn- "Just get the costume to me so I can wear it on the 7 day treadmill world record event in the week leading up to the London marathon".

And Glyn wore the costume to attract more publicity and boost the fundraising. 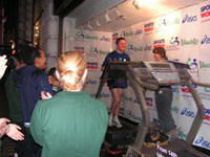 As the seventh day came to a close, it was decided that Liam would close the challenge by being the final runner on the treadmill- running the final twenty minutes to the close of the event.

A huge crowd of folk had gathered outside the store window and most of them who had become fans of Liam Marston through the week.

Everyone was clapping, cheering and shouting out "LIAM, LIAM", and Liam really played up to the crowd by giving a cheeky smile and a wave that I have only seen used by the Royal family.

Liam was enjoying his 'superstar' status in Lilywhites- he enjoyed the hugs and kisses he got from women who worked at the store too.

A great memory of a great fundraising event and a special needs kid who made the event even more special.