Visit this page to view some of the many media stories of Glyn Marston.

Only an handful of the media stories about Glyn's great achievements and dedicated charity fundraising efforts.

A tireless Walsall fundraiser is pedalling his way to a national prize and lunch with an Olympic legend – after being nominated to win the HiQ Hero award.

Glyn Marston, who has raised more than £85,000 for a number of charities over the years, has been nominated to win the prestigious accolade, which honours unsung members of the community who carry out a great deal of unrecognised selfless work.

The Blackall Close resident has run over 100 marathons and became the first man ever to complete the non-stop 145 mile Birmingham to London marathon five years in a row.

He is now in line to win the HiQ Hero honour, which includes £5,000 for a charity of his choice, £500 for himself and lunch with campaign ambassador Sally Gunnell.

Glyn’s son Liam nominated him for the prize, and the 47 year-old said today: “It would mean the world to become the HiQ Hero, for a number of reasons.

“To meet Sally Gunnell would be a dream come true, and the awareness generated for the causes I represent would be priceless.”

Glyn has raised money for a number of charities including the National Autistic Society and St John’s Ambulance.

He is now focusing all of his efforts to raise cash for the new Walsall Hospice and will cycle from John O’ Groats to Lands End soon to swell the coffers.

Glyn started running to quit smoking in 1993 and competed in his first marathon just 12 weeks later.

He has competed in scores of events ever since, including the London to Brighton 55 mile non-stop run.

He has now turned to cycles to help him raise the cash, after sustaining a serious knee injury.

HiQ’s retail director Juergen Titz said: “This is a huge campaign for us and one that we really hope everyone will get involved with. It is nice to see the nomination for Glyn, who is an extremely strong candidate who has done so much fundraising.

“To have Sally Gunnell working as an ambassador means so much to us, and we hope she will inspire other Walsall residents to vote for members of their community to win our award.” 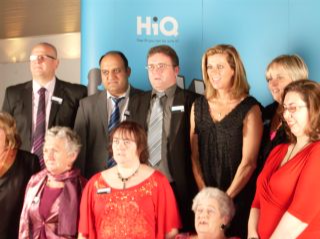 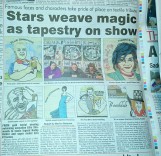 The Walsall Tapestry, one huge embroidered piece of work to celebrate the landmarks, towns and folk that make Walsall a great place to be proud of.

Glyn Marston has his name stitched into the landmark work of art for everyone to see for many years to come- this is in recognition for his outstanding sporting acheivements, fundraising work and community sports coach. 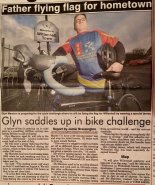 Express and Star story about Glyn Marstons challenges for 2017.

Flying the flag for Willenhall and raising money for charity at the same is the goal for 2017 as Glyn repeats his feats of endurance as Walsall's real running Ambassdor on his bike.

Glyn can no longer run due to injury but he can cycle and he will take his bike ( along with the Willenhall flag ) to great regions of Europe to support worthy causes. 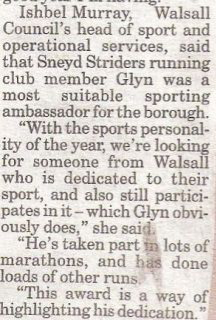 Back in the 1990's Glyn Marston was reffered to as 'WALSALL'S RUNNING AMBASSADOR' by Walsall sports council and local media.

Glyn does look back now and feels so proud of the community who named him 'AMBASSADOR' , more importantly the very same folk from the boroughs of Walsall ( including media) still call him WALSALL'S REAL RUNNING AMBASSADOR.... WHAT AN ACOLADE. 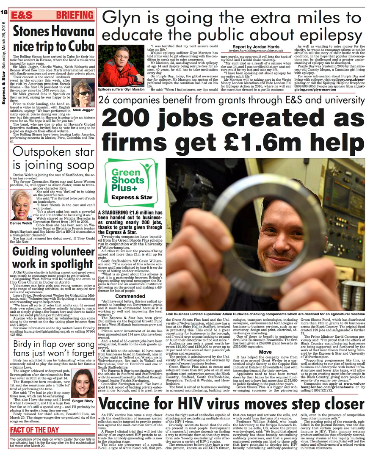 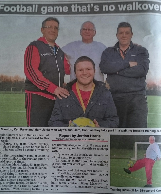 Express and star story of another community club that has been set up by Glyn Marston - 'WILLENHALL WALKING FOOTBALL CLUB'.

Promoting Walsall and its boroughs through sport is always Glyn Marston's aim, and he is doing a great job.

There is a lot more to come in the future of Walking football in Willenhall and you can be sure that Glyn Marston will be the Ambassador of yet another new sport in Walsall. 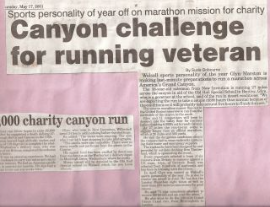 Please read this page to see just a handful of the stories that feature Glyn and his extreme stamina to take on the most enduring of races and challenge.

Running across the Grand canyon, running for 7 days on treadmills to break world record, running in distances of 155 miles non stop and running in marathons around the world. This page could be filled a million times over with the many wonderful stories about Glyn Marston. 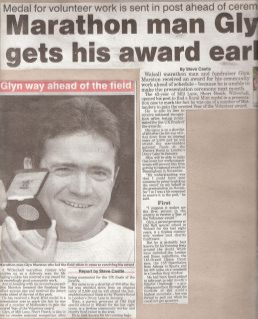 A great media story- 'Volunteer of the year 2005' awards and Glyn Marston was a successful nominee- However, Glyn was to be in Greece representing Great Britain in the 155 mile SPARTATHLON when the official ceremoney was to be held on November the 7th in Birmingham. So in order to allow Glyn the joy and sense of pride of receiving his medal- it was sent out to Glyn a few months earlier than the official ceremony.

Glyn Marston was one of only 400 nominees from the 2005 nominees to go on the grand final at Drury lane Theatre, London for the overall final of the awards- he came a proud runner up in his catorgory.

This is a story of great intrigue- Glyn Marston was awarded WALSALL'S SPORTS PERONALITY OF THE YEAR 2000/1 , with this award comes a trophy for the winner to keep forever and their name on the official shield ( as pictured).

The rules of this award is that one person can only win this honour once in their lifetime and no more!

The year after Glyn had won this award, another Walsall man was awarded the honour- but in the year 2002/3 Glyn made local history by being awarded the title of Walsall Sports personality once again, the only problem was that the organisors could not retrieve the huge shield from the previous winner and therefore, Glyn Marston could not have his name put on the shield once again.

The organisors who were behind this award were forced to disband, leaving Glyn Marston with the honour of being the only person to win this award twice but also, the final person to win it too. In 2011 The shield was tracked down and Glyn finally saw his name on the shield- meaning that he is still (officially) Walsall's sports personality of the year for many years on. 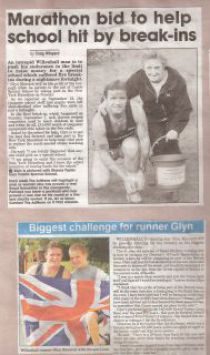 When it comes to scrapbooks Glyn has many and all filled with media stories of his achievements- his charity fundraising quests and his outstanding community work.

Glyn is consider a local hero, a local celebrity and a true Ambassador to his cause (not Glyn's words).

Glyn never intended to become the hero that folk see him as today- he is a normal man who decided to quit smoking and took up long distance running- the rest is history. 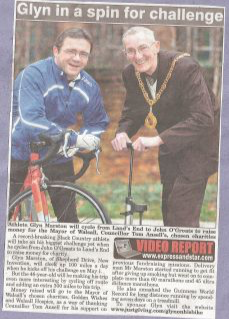 Meeting celebrities on his fundraising events and raising funds for different Mayors of Walsall.

Glyn Marston has many scrapbooks and each one bursting at the seams with media stories that have been cut out of newspapers.

Below are a few of the many, many media stories about Glyn Marston. It is no wonder that the communites and boroughs of Walsall gave him the title of Running Ambassador- a title that he rarely used. The stories below are features of Glyn running from Paris to London       (with a marathon at the start and a marathon at the end), running across the Grand Canyon and many more. 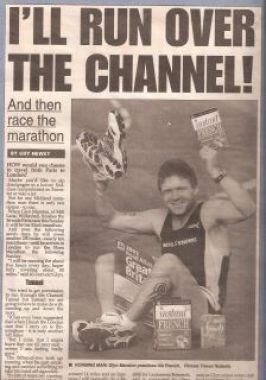 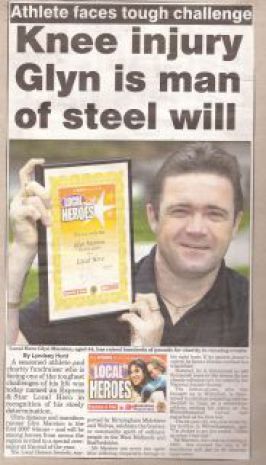 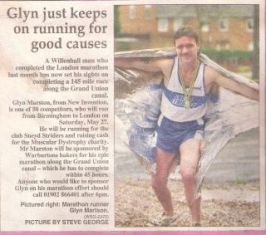 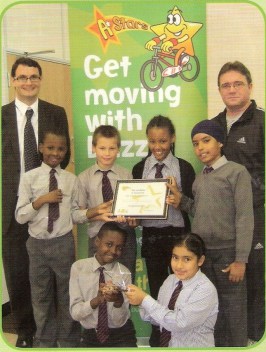 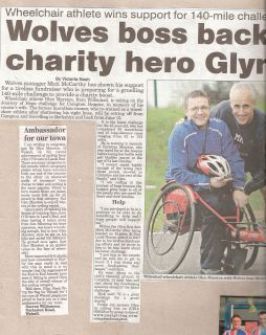 With Mick McCarthy as a promotion for a charity event. 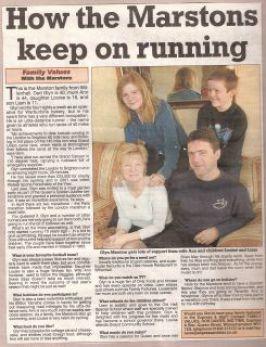 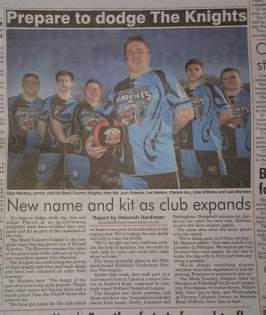 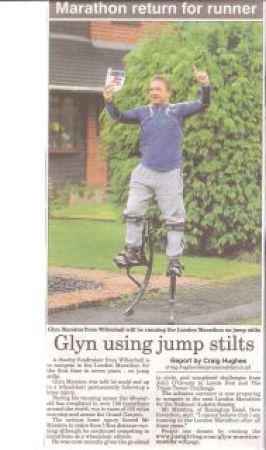 Running on stilts? there are no boundaries to Glyn's charity fundraising. 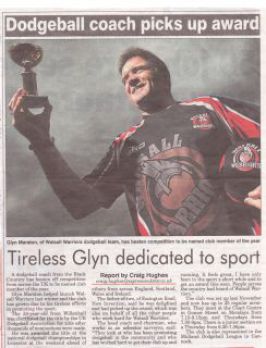